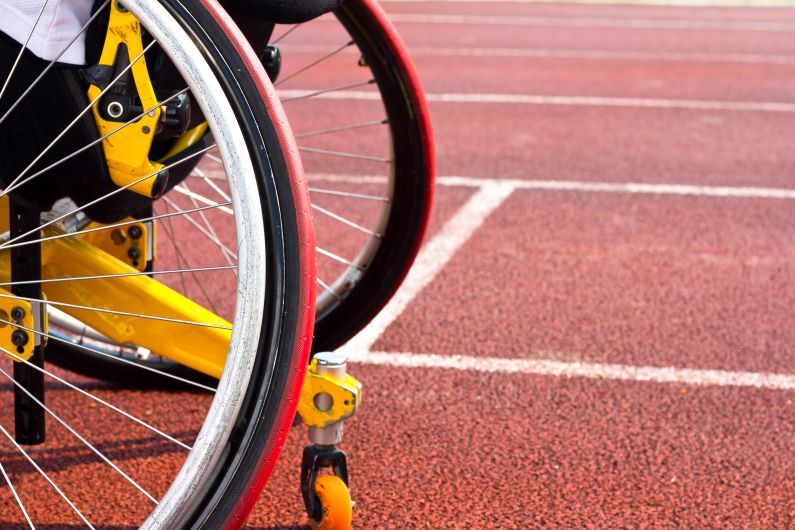 We have all heard of Katie Ledecky, but what about Jessica Long? At 12 years of age, Long was the youngest competitor on the US 2004 Olympic swimming team. She has held several world records in swimming.

The difference between Long and Ledecky is that Long is missing both of her lower legs. She is a Paralympian, competing in the Paralympics held several weeks after the Olympics.

Most Americans would say Long is “a person living with a disability.” This is known as people-first speech, invented by advocacy groups in the USA in the late 1980s. People-first speech rejects references such as “disabled person,” “deaf person”. The idea is to focus on the person as a human being before any qualifiers or adjectives.

I was a teenager in the USA at the time that people-first speech proliferated. I later worked under the guidelines of the American with Disabilities Act (ADA) in museums and schools. So I shudder each time I hear someone in German refer to Jessica Long as “eine Behinderte” – literally, “a disabled”.

Germans often convert adjectives into nouns, a convenient shorthand for an otherwise verbose language. This mechanism is in stark contrast to people-first speech. It not only puts the qualifier before the noun, it uses the qualifier as the noun. The same is true in German for entire groups of people, so “die Behinderten” means “the disabled”.

Of course, saying “die Behinderten” is snappier than translating the people-first phrase “people living with disabilities” into German. “Menschen mit körperlicher Einschränkung.” Even snappier, Germans use diminutives such as “die Behindis” or, for people using “Rollstuhle” (wheelchairs), “die Rollis”.

Is it just my American political-correctness and brainwashing by the ADA, or is there something more to using people-first speech? And how much attention should translators give to it?

According to the Sapir–Whorf hypothesis, language significantly shapes our ideologies. Therefore, use of the German plural noun “die Behinderten”, or worse the diminutive, “die Behindis”, may belittle the people to whom it refers. This use of a qualifier as a noun may cause German speakers to incorporate people living with disabilities differently into their world view than if they were using people-first speech.

When translating people-first language, it is of utmost importance that a translator be familiar with this concept. A translator should consult the guidelines of disability acts, advocacy groups, or an institution’s policies.

For the Paralympics athlete Jessica Long, translators should refer to her as “a person living with a disability.” This is according to the publishing guidelines of The International Paralympic Committee (IPC). The IPC online glossary commands use of people-first speech in English, French, and Spanish – no matter how long-winded for the latter two.

“This was indeed a conscious decision, as we wanted to focus on the person instead of the disability or impairment,” I was told by Eva Werthmann, the Media Operations Senior Manager at IPC. I was impressed. But with only three languages in the IPC glossary, what about German speakers and German media?

Times may be changing in Germany. At the 2016 Paralympics exhibit at the Ottobock Science Center in Berlin, the qualifier-as-a-noun shortcut was excluded from all text. Instead, the German text took up far more white space than the English text. This is because it used the lengthy words necessary to conform to people-first speech. Good for Ottobock!

While some advocacy groups still debate using people-first language, it is clear that the IPC has chosen to promote it. So watch for Paralympics headlines like, “Jessica Long, swimmer living with a disability, steals hearts and beats records at Rio 2016 Summer Paralympics”.

At BeTranslated our experienced translators are specialized in their specific areas of expertise and fully aware of relevant guidelines, such as the IPC’s glossary mentioned in this article. If you require translation of any type of text, get in touch for more information about how we can help you, and receive a free, no-obligation quote.