What You Should Know About American Sign Language (ASL) 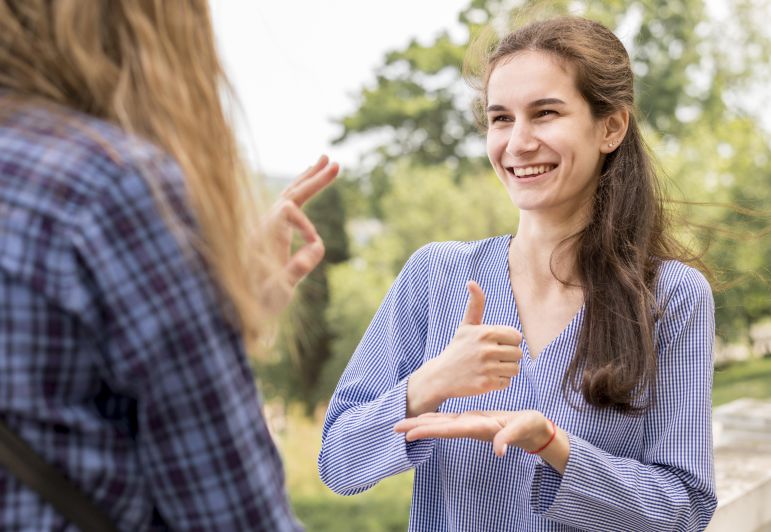 There are more than 140 signed languages used around the globe. These highly complex and extensive means of communication, a fraction of the estimated 7,000 languages spoken worldwide, utilize expressions, movements, and gestures. Unfortunately, they remain highly misunderstood among much of the hearing world.

Like spoken tongues, signed languages have evolved and there is no universal sign language. Even users of American Sign Language (ASL) and British Sign Language (BSL), which you might think would be as similar as American and British English, would need the help of an interpreter to communicate. Let’s take a more detailed look at ASL.

Signed languages have a long history

While ASL has been around for approximately two centuries, there are earlier documentations of other sign languages. In 16th-century England, a parish record mentions a man using signs to communicate at his wedding. A century later diarist Samuel Pepys writes about a deaf boy who “made strange signs” as he described 1666’s great fire of London via hand gestures. The specifics may be lost to time, but the documentation that people spoke via signs and gestures lives on.

ASL itself has roots in French Sign Language (FSL). French Sign Language developed in France in the mid 18th century, was used to educate the deaf in France, and is seen as a precursor to ASL. In fact, many sign languages around the world were influenced by FSL. Most simply blended their native signing language into the FSL, resulting in various unique idioms.

The next step in ASL’s development

In the American colonies in the early 1700s, one in four islanders on Martha’s Vineyard were Deaf, so residents developed their own sign language, allowing everybody to communicate.

Then, in 1816 American minister Thomas Gallaudet brought Laurent Clerc, who was Deaf, to the United States, to set up a school for the Deaf. A year later they’d set up shop in Connecticut, using both FSL and Martha’s Vineyard sign language, which eventually became the bedrock of ASL, along with other influences that built and enriched its lexicon.

Despite the fact that it facilitates successful communication, for a number of years signing received some pushback. People like Alexander Graham Bell advocated for oralism – the idea that the Deaf should learn speech and lip-reading instead of signing. Sign language was banned in schools, but ASL persisted outside the classroom, thanks to its popularity and its proponents.

Today ASL is the fourth most-used language in the U.S. (behind English, Spanish, and Chinese) used not only by the Deaf, but by the hard of hearing as well as among hearing people.

There are many myths surrounding sign language in general, perhaps the most prevalent being that they’re universal, and that all signers can understand one another. The truth, however, is more complex.

The sign languages used in different countries, and even regions, are unique, though there can be some overlap. Between Canadian Sign Language and ASL, for example, there are some similarities, however, Eastern Canada’s sign language also varies from that used in the western half of the country, which has some British and American Sign Language influences.

The grammar of sign languages differs from that of their respective countries’ or regions’ spoken languages. ASL, for example, is distinct from spoken English. It has its own rules for word formation and order. While an English speaker may vocalize a question by raising their voice, an ASL speaker may raise their eyebrows, widen their eyes, or lean forward to express the asking.

ASL speakers make use of facial expressions, hand gestures, and body positions to serve as modifiers. (For example, an interpreter may sign something has “increased” but to show that it’s only by a small amount they will squint their eyes or press their lips tightly together.) A raised eyebrow when forming a question (up for a yes/no query or down for who-what-where-when-why) and pointing are other ways to communicate in greater detail and with more expression in ASL.

It’s worth noting that ASL tends to use finger spelling only for proper names or places. ASL also differs from Signed Exact English (SEE) in that ASL is its own distinct language – a visual one – whereas SEE is a way to sign the English language.

Language deprivation and poor communication can put Deaf children at greater risk for depression and other disorders. Adults with hearing impairments in turn have been found to have twice the rates of moderate to severe depression of those with excellent hearing. In turn, conditions such as depression, stress, and anxiety can fuel behaviors that lead to substance abuse disorders, generating a need for treatment for alcohol addiction. The value of supporting sign language and other means of communication for the Deaf and hard of hearing is therefore undeniable.

Professional translators play a crucial role in aiding communication between speakers of different languages. At BeTranslated, our translators are not only experts in their language combinations, but also in specialized subject areas, such as IT translation or business translation. Our experienced project managers will match you with the best translator for your specific needs. For more information or a free, no-obligation quote, get in touch today.