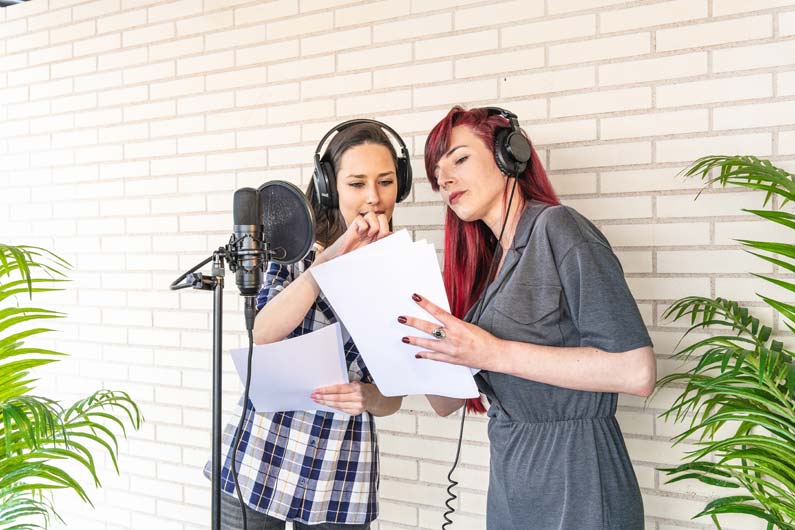 To be shown to foreign audiences, films and TV shows must either be dubbed or have subtitles added to translate the dialogue and narration into the language of the relevant audience.

Each of these films or TV shows goes through a specific process when either being dubbed or subtitled. Oftentimes, these different processes lead to different results.

Moreover, the advantages and disadvantages of producing and viewing each type of translation mean one will be more appealing to different producers and audiences than the other.

When a film or show is dubbed, actors’ voices replace the dialogue of the original actors when they speak, with dialogue spoken in the relevant language. As the actors on the screen silently mouth the words in their original language, voice actors speak those words in a different language.

In addition, if the work contains any narration, this is also translated and spoken in place of the original voiceover when it occurs in the work.

An alternative use of dubbing is to improve the sound quality of work in post-production. A piece may be dubbed in its original language to correct any recording or pronunciation errors.

When a film or show is subtitled, the lines of dialogue and narration appear as text superimposed on the screen, generally on the lower portion of the screen, below the action of the film.

The dubbing and subtitling processes

Regardless of whether a film is subtitled or dubbed, it starts with working from a translated script. This script must be translated from its original language into the language of its intended audience by a translator fluent in both languages.

Once this translated script is ready, the processes of using it to dub or subtitle a piece are quite different.

How a film is dubbed

To dub a film, voice actors are recorded reading the dialogue or narration in sync with the original footage.

The basic process of dubbing a film can be broken down into three basic steps:

How subtitles are added to a film

The process of subtitling involves editing the video to include the subtitles overlaid upon the video.

When looking at dubbing vs subtitling, people may prefer one over the other for a variety of reasons.

Pros and cons of subtitles

One of the key benefits of viewing a subtitled work is that audiences can enjoy the work in its original language and appreciate the full scope of the actors’ performances. Subtitles can also be useful for viewers who are deaf or hard of hearing, as they can add nuance to the translation lacking in the closed captioning of the work.

The viewer’s attention, however, is divided between watching the action on the screen and reading the text flashing beneath it. In this way, some viewers may miss an important or interesting visual or audio element of the work.

Another common complaint about subtitles is that they often compromise on total faithfulness to the script due to time constraints. This is because the pace of reading is far slower for most people than the pace of speaking and listening. Because of this, not all of the dialogue spoken in the film may appear in the subtitled translation.

Subtitling a film may also be less effective and desirable than dubbing when the intended audience of the work is children, as they may have a harder time with the level of reading it requires.

Pros and cons of dubbing

One of the key benefits of viewing a dubbed work is that there’s no need for reading. However, distractions can still occur due to the mismatch between the way the actors’ mouths are moving on-screen and the dialogue heard.

Another common complaint about dubbing is a loss in the quality of the acting between the original cast and the dubbed cast.

Here are some answers to common questions about film translations.

Are subtitles done at the same time as dubbing?

Also, since dubbing is a more involved process, it can take considerably longer to produce a dubbed translation than a subtitled one.

Why do dubbing and subtitles sometimes differ in their translations?

One of the main reasons dubbing and subtitles differ in translation is, as cited earlier, time constraints. Reading takes longer than listening, so a translation cannot be as complete and comprehensive for a subtitled work as a dubbed work. Some of the language may be trimmed or cut out for practical reasons.

Another reason scripts for dubbing may differ from those for subtitled works is the effort made in dubbed works to sync the dialogue more closely with the lip movement of the actors so as to be less jarring to the audience.

The importance of quality translation

Whether dubbing or subtitling a project, the quality of translation is paramount. Without a properly translated script, no amount of voice acting or subtitling can properly convey the project as it was originally intended to a new audience.

Translating a script properly is more than a rote task of duplicating the dialogue verbatim. It’s also a matter of adaptation, in which the nuances of both the original and translated languages and the cultures from which they each stem are taken into consideration. Elements like emotion and tone are critical to an effective translation.

Today, many films are both dubbed and translated for the same audience, giving audience members the option of viewing either version.